Statement made on 2nd November

I was in the process of writing a longer article around the events at the Anarchist Bookfair on Saturday, but I am also trying to stay on top of the rest of my life while dealing with the horrendous bullying of people around me which is underway by some trans activists and allies. I have been traumatised by my experiences on Saturday and by events since, resulting in a lack of sleep and inability to concentrate. I wanted to complete the longer article, but as lies are being circulated by those who attacked me, I feel I have to put out a shorter statement now.

When I refer to trans activists in this statement I mean people who are activists on trans issues, I do not mean that all of them were trans, nor that they represent the views of all trans identifying people. For those who don’t know what TERF means, it is an acronym for Trans Exclusionary Radical Feminist, but whatever its origins it is currently used as a term of abuse to dehumanise women and so excuse violence and bullying against them.

I thank everyone who is taking a stand against bullying and I urge more people to stand in solidarity too. Those trans activists and allies who are carrying out the bullying can be defeated by growing numbers of people resisting that bullying. This will facilitate a proper space for the concerns of women and trans identifying people to be discussed.

Short statement on the facts:

Of course I believe that all trans identifying people have the right to live their lives free from harassment and abuse, as does everyone. But I note the double standards that while women are repeatedly told to explicitly affirm that right, there is never a requirement on those advocating for trans issues to acknowledge the level of violence and harassment that women face or to state their opposition to sexist abuse, or to challenge the outrageous statements made by some trans advocates which repeatedly deny women’s experiences and silence women’s voices. This is a power imbalance based on the long held expectation in society that women should be subservient.

It is notable that a statement issued a few days ago calling for groups to boycott the Bookfair in future, makes no mention of sexism or of women’s rights or for the provision of women only meeting spaces. There is no acknowledgement at all that women are subject to oppression, sexual violence and harassment on the basis of our sex. It appears that those who have signed the statement are in denial about women’s experiences in much the same way that the rest of society is. Only the recent and snowballing reports of sexual harassment and assault in Hollywood, Parliament and via #MeToo have started to awaken people to reality. It is time those who signed up acknowledged that reality too.

The Anarchist Bookfair organisers do a huge amount of work to facilitate an amazing event which allows thousands of people to learn about alternative views and experiences of oppression and to discuss ways to improve society for the benefit of all. The self entitled mob attacking women for leafleting thought they had the right to dictate who could say what in that space rather than arguing their views and listening to the counter arguments to develop critical thinking. They need to think again.

I am lucky to have so many friends and comrades who put themselves in the line of fire to protect me, I thank them for this, especially those who were assaulted and abused. I also thank everyone who has sent messages of solidarity and support which are enabling me to get through this horrendous experience. I include in my thanks those trans identifying people and supporters who may not agree with my views but who recognise the importance of women being able to speak too and are resisting the intimidation they face from people claiming to act in their name.

I want to add that a couple of people have commented that while they agree with women being able to speak on these issues, they feel that in a few places the wording used is not helpful. The problem with requiring leaflets to be perfectly worded before they can be distributed is that it excludes very many people from being able to express their opinions. Only the confident will feel able to speak. It particularly excludes those born female who are generally socialised from a young age to keep quiet about their views and so who are less confident about expressing them. Perfection is certainly not a qualification used to prevent men from speaking. And ultimately, who decides what is right? That is the purpose of having debate, so we can all clarify our thinking.

Leaflets distributed at the bookfair about the Gender Recognition Act

I am attaching the leaflets so people can read for themselves rather than speculating about what they said. Before people jump to conclusions about the leaflets, I would like them to understand the violent misogynistic bullying and death threats that women are being subjected to by a really vile subset of trans activists, so that they are aware of some of the context of women’s concerns. This abuse has been going on for a long time now. People need to understand just how frightening and intimidating it is for women, and why women are fighting back and need allies to stop this abuse and create the space for discussion on these issues. Here are a few examples, there are plenty more on https://terfisaslur.com/ 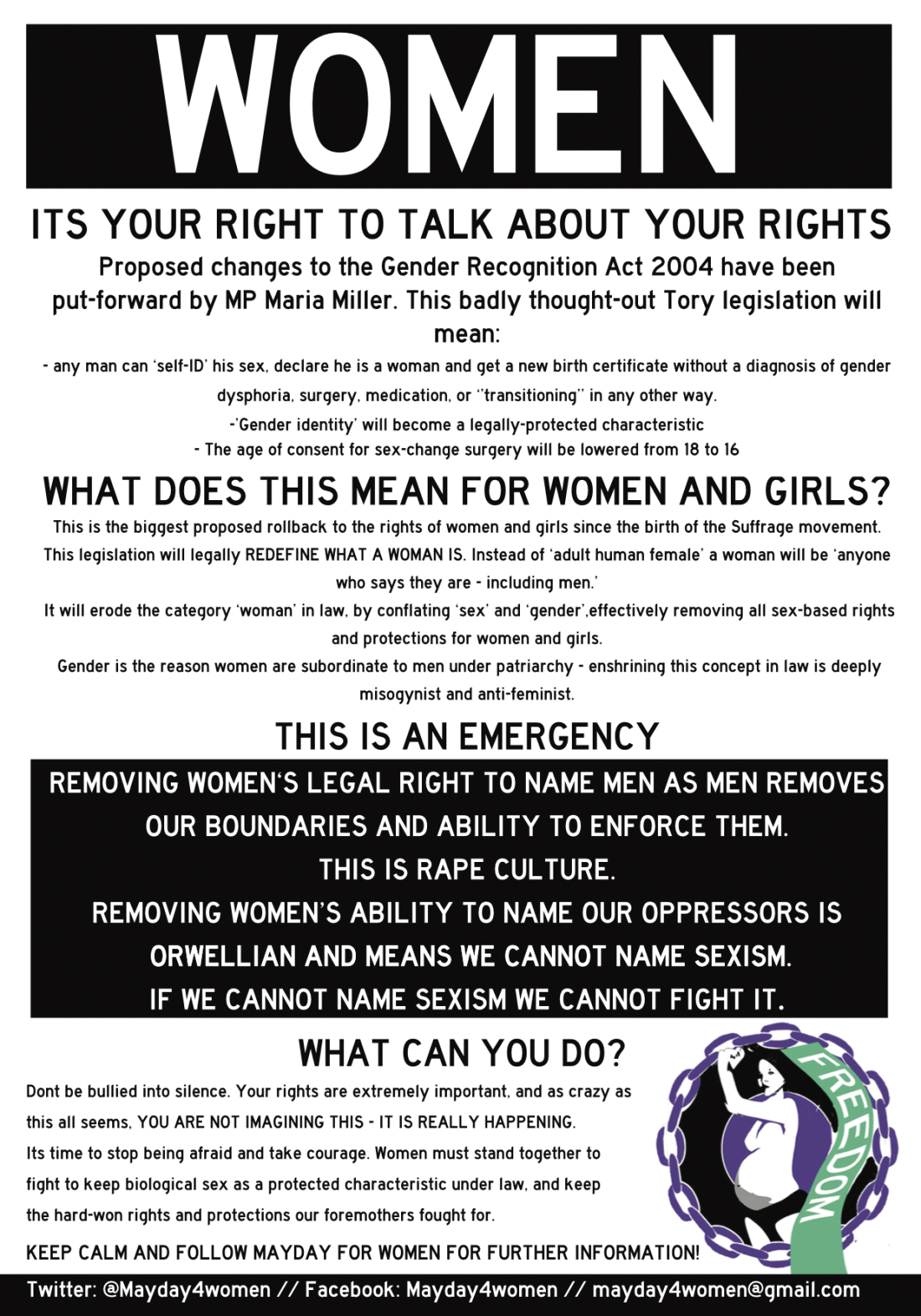 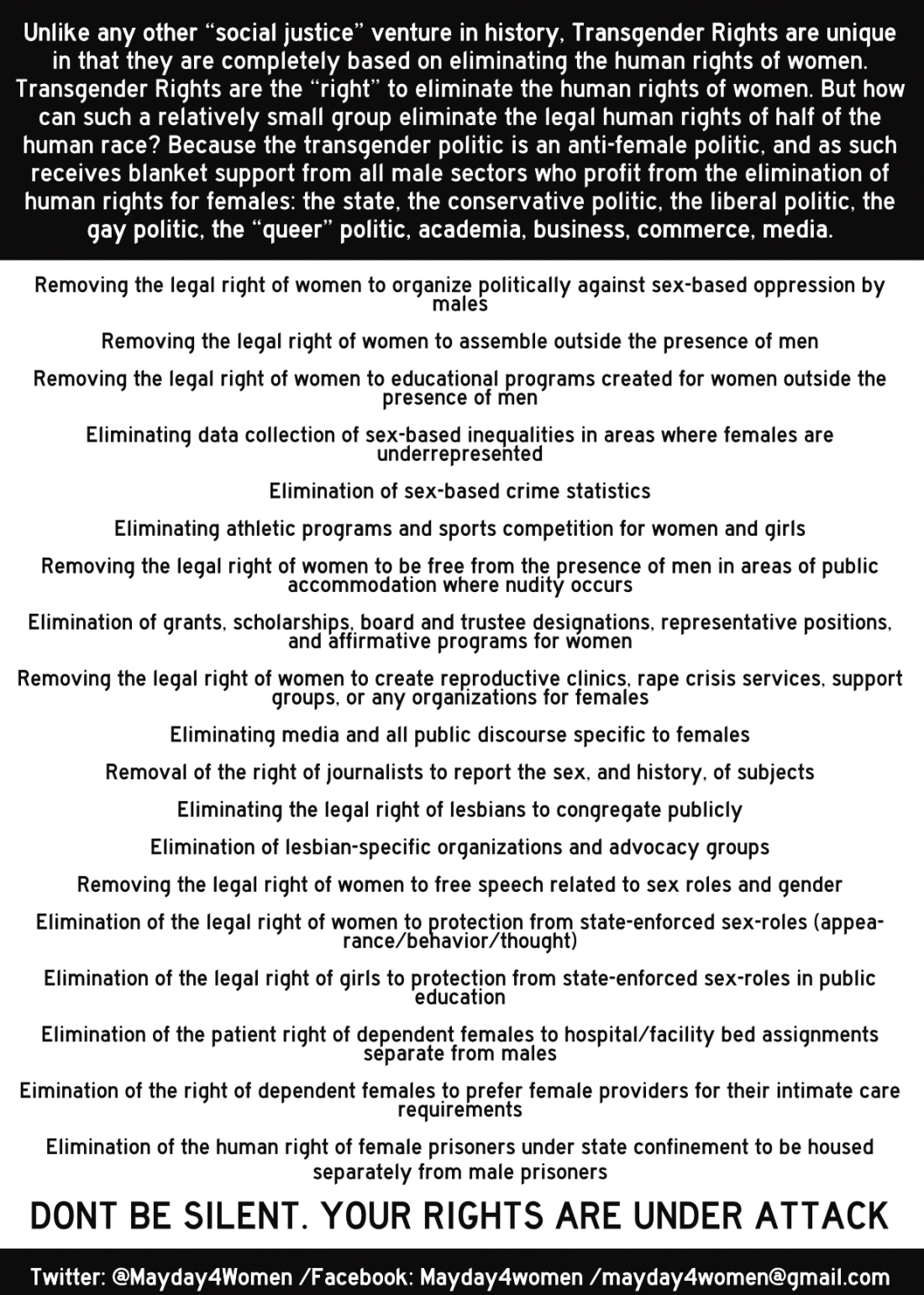 View all posts by helensteel12